Bailey Peninsula (The name as it would appear in a gazetteer)

Bailey Peninsula  (The name as it would appear on a map)

Rocky peninsula, 1.8 mi long and 1 mi wide, lying between Newcomb Bay and O'Brien Bay at the E side of the Windmill Islands. First mapped from USN Operation HighJump aerial photographs taken in February 1947 and thought to be an island connected by a steep snow ramp to the continental ice overlying Budd Coast. The term peninsula was considered more appropriate by the Wilkes Station party of 1957. Named by the US-ACAN for Cdr. Claude E. Bailey, USN, captain of the USS Henderson, destroyer escort of the western task group of USN Operation HighJump, Task Force 68, 1946-47. 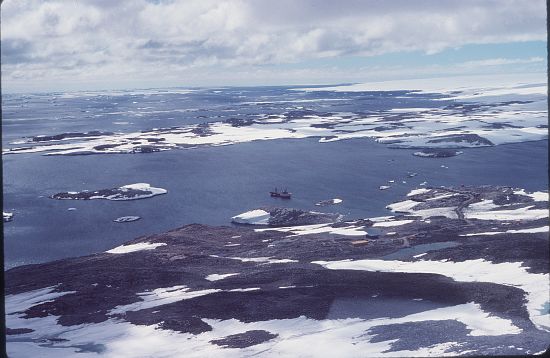